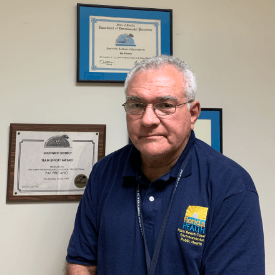 Warmer winter temperatures make tick bites more likely and raise the risks for tick-borne diseases, but many clinicians don't know the clinical signs or have outdated notions about Lyme and other diseases, due in part to a lack of data. In Indiana, researchers at Purdue and Indiana universities and the University of Notre Dame are tracking ticks and tick-borne diseases, but most clinicians get information on emerging risks from public health agencies, so the Indiana Department of Health is reviewing the data and may issue guidance.

A salmonellosis outbreak affecting at least 32 people in 20 states has been linked to contact with pet bearded dragons, according to the CDC, and it's probable that many more cases have gone unreported, writes physician Bruce Lee, a professor of health policy and management at the City University of New York School of Public Health. Steps to avoid salmonella infections include washing your hands thoroughly and frequently whenever handling bearded dragons, cleaning and disinfecting everything that a bearded dragon touches, and waiting until children are at least 5 years old before allowing them to have contact with a bearded dragon.

Officers at the San Diego Customs and Border Protection Office have seen an increase in the number of attempts to move eggs across the US-Mexico border, according to a tweet from director of field operations Jennifer De La O. “The San Diego Field Office has recently noticed an increase in the number of eggs intercepted at our ports of entry,” wrote De La O in the Tuesday tweet. “As a reminder, uncooked eggs are prohibited entry from Mexico into the U.S. Failure to declare agriculture items can result in penalties of up to $10,000.”

Bringing uncooked eggs from Mexico into the US is illegal because of the risk of bird flu and Newcastle disease, a contagious virus that affects birds, according to Customs and Border Protection. In a statement emailed to CNN, Customs and Border Protection public affairs specialist Gerrelaine Alcordo attributed the rise in attempted egg smuggling to the spiking cost of eggs in the US. A massive outbreak of deadly avian flu among American chicken flocks has caused egg prices to skyrocket, climbing 11.1% from November to December and 59.9% annually, according to the Bureau of Labor Statistics. The increase has been reported at the Tijuana-San Diego crossing as well as “other southwest border locations,” Alcordo said.

For the most part, travelers bringing eggs have declared the eggs while crossing the border. “When that happens the person can abandon the product without consequence,” said Alcordo. “CBP agriculture specialists will collect and then destroy the eggs (and other prohibited food/ag products) as is the routine course of action.” In a few incidents, travelers did not declare their eggs, and the products were discovered during the inspection. In those cases, the eggs were seized, and the travelers received $300 penalties, Alcordo explained. “Penalties can be higher for repeat offenders or commercial-size imports,” he added. Alcordo emphasized the importance of declaring all food and agricultural products when traveling. “While many items may be permissible, it’s best to declare them to avoid possible fines and penalties if they are deemed prohibited,” he said. “If they are declared and deemed prohibited, they can be abandoned without consequence. If they are undeclared and then discovered during an exam the traveler will be subject to penalties.”

An outbreak of H5N1 avian influenza in farmed mink in Spain involved a novel variant that may spread more readily between mammals, and scientists are concerned about the implications for other species, including people. The variant included a change that has been shown to increase the ability of some influenza viruses to proliferate in mammals, but all the mink were culled, and no workers at the farm tested positive for H5N1, according to a report in Eurosurveillance.

The COVID-19 pandemic has eased, but the numbers of cases and deaths remain high, and infectious disease experts are concerned about the potential for SARS-CoV-2 to "ping pong" back and forth between animals and humans, mutating with each spillover event, according to a paper in Nature Reviews Microbiology. Countries are scaling back SARS-CoV-2 surveillance and sequencing programs, which may lead to late detection of future variants.

Researchers with the Wildlife Conservation Society and the Congolese Foundation for Medical Research recently collected blood samples and nose and throat swabs from around 100 fruit bats in the Republic of Congo to test for zoonotic diseases. The researchers hope to quantify risks posed by the bushmeat trade, particularly as they pertain to Ebola virus.

Scientists believe raw date palm syrup may be the missing link that explains why deadly Nipah virus spills beyond bats and flares up in people every few years in central Bangladesh, where it has sparked particular concern because it has spread from person to person. Veterinarian Zhahirul Islam says only about 1% of bats shed the virus, and Islam is studying whether stress among the animals may explain the spillover in an effort to mitigate risk in the future

A joint symposium on the control of the spread of Creutzfeldt-Jakob disease (CJD) was held with the Korea Centers for Disease Control and Prevention and the Korean Neurological Society Saturday. The Korean Centers for Disease Control reported a total of 67 cases occurred in Korea in 2021, and the trend has been gradually increasing over the past five years–  38 in 2017 → 54 in 2018 → 53 in 2019 → 64 in 2020 → 67 in 2021.

Creutzfeldt-Jakob disease (CJD) is a type of (transmissible spongiform encephalopathies) TSE or prion disease that occurs in humans and is classified into sporadic CJD, genetic CJD, and iatrogenic CJD depending on the route of infection. CJD has an incubation period of several years to several decades, but cognitive dysfunction and neurological symptoms (visual impairment, gait disturbance, dystonia, Dyskinesia, etc.) is a rapidly progressing infectious disease with high severity.

Analyzing the number of occurrences by type as of 2021– about 85% (57 cases) of sporadic CJD (sCJD) occurred without any particular cause, and about 15% (10 cases) of genetic CJD (gCJD), which spreads and occurs through heredity. During the symposium, in-depth discussions were held on the necessity of preventive management at medical institutions to block secondary transmission of CJD, the need for autopsies on CJD patients, the role of autopsy centers, and measures to strengthen the CJD surveillance system

The Alpha and Gamma SARS-CoV-2 variants continued to spread among deer and mutate after they were no longer spreading widely among humans, researchers report in “Proceedings of the National Academy of Sciences”, and the findings suggest deer could be a reservoir and a source of new variants. Experts said the conclusions suggest the virus could evolve to be more dangerous to animals, in addition to people, and they underscore the importance of wildlife surveillance

Avian Influenza May Have Killed Hundreds of Seals – 2/1/2023

Avian influenza may have spread from seal to seal, killing more than 700 in December in an area of the Caspian Sea where a number of birds had recently died of highly pathogenic H5N1 avian influenza, according to researchers at Dagestan State University. Scientists found avian influenza in tissue samples, but have not confirmed how the virus was transmitted or whether it directly caused the seals' deaths.

A farm in the Netherlands has been quarantined after a cow tested positive for bovine spongiform encephalopathy for the first time since 2011, and Agriculture Minister Piet Adema assured lawmakers that the animal "did not get into the food chain and does not constitute a risk to food safety." Necropsy results confirmed that the 8-year-old cow had a naturally occurring form of the disease that was not caused by eating contaminated feed.

The Washington Department of Fish and Wildlife (WDFW) confirmed that a bobcat from northeast Washington tested positive for the highly pathogenic avian influenza (HPAI) virus H5N1 2.3.4.4 strain last month. This marks the fourth mammal in Washington State to test positive for HPAI since July of 2022. Three raccoons (one on Camano Island, one in Spokane County and one in the Tri Cities area) tested positive in 2022. Avian influenza, also known as bird flu, refers to the disease caused by infection with avian (bird) influenza (flu) Type A viruses. These viruses occur naturally among wild aquatic birds worldwide and can infect poultry and other bird and animal species. Wild aquatic birds include ducks, geese, swans, gulls and terns, and shorebirds.

Avian influenza A viruses are very contagious among birds through saliva, nasal secretions, feces, and contaminated surfaces. These viruses are classified into two categories: low pathogenic avian influenza (LPAI) and highly pathogenic avian influenza (HPAI). LPAI viruses cause either no signs of disease or mild disease in chickens/poultry (such as ruffled feathers and a drop in egg production). HPAI can be transmitted to domestic birds such as chickens, ducks, and turkey and generally leads to death for these birds.

The newer Kraken and Cerberus sub-strains of the COVID-19 virus are continuing to show moderate growth in Italy, the Higher Health Institute (ISS) said in its latest variant report Friday.    The increase, albeit moderate, in the proportion of sequences linked to the sub-linages CH.1.1 called Cerberus (2.2% compared to 0.6% in the previous bulletin) and XBB.1.5 known as Kraken (1.1% compared to 0.05%) continues, according to the latest ISS variant bulletin for the last 6 weeks (19 December 2022 - 29 January 2023). Omicron accounts for almost all (99.97%) of the sequencing. The remaining 0.03% can be attributed to a Delta/Omicron recombinant. BA.5 is predominant (87.0%), with 138 different sub-linages. Of these, BQ.1.1 reached 38.9% (was 30.8% in the previous report).